Tonight, gentle readers, a tale of drama and derring-do! A mystery was solved, a dastardly plot uncovered, an insidious impostor unmasked, several computers rebooted, a culprit nabbed, and, despite its most vicious efforts, the criminal’s final revenge borne without injury. I present: The Alpaca Saga!

Yesterday night the adaptive secondary — aka adsec, asm, shell, TS1, and as of last week Lollipop — began to display some troubling symptoms. For instance: every so often, even in the gentlest of conditions, the shell would suddenly RIP (don’t worry, the falling-to-pieces is only metaphorical). That in itself isn’t terribly uncommon, but the circumstances were a bit strange: the adsec would briefly report missing values for elevation and for windspeed. A shriek into the void! The wail of an injured creature in the darkness! But then the elevation and windspeed would both return, pretending that nothing was amiss.

Obviously, something was amiss.

Simultaneously, in the once-peaceful environs of the Clio workstation, bayside stage focus moves were being sent, as messenger pigeons into a clear blue sky…and then snapped up by an invisible space dragon, never to return. By which I mean, the bayside stage at the WFS never moved. And yet, it could be moved without problems from the WFS directly.

What do absent elevation, unreadable wind speed, and unheard Clio commands have in common? They’re all communications sent through the computer that masterminds the MagAO processes: the Magellan adsec supervisor, or magadsecsup.

In the dead of night, Jared bravely took his life in his hands and went down to the equipment room — is that its name? the one with the MagAO computers and racks and occasional unstable ladders — anyway, Jared found A CLUE!! Which was: the little blinky lights on the ethernet ports connecting magadsecsup and the network switch were neither happy-working-green or transmitting-information-amber, but instead an alarming shade of ORANGE. So Jared and Emilio beheaded a cable and put it in a different switch port.

But the crimes did not stop!

We hobbled through the night. The adsec wept. The adsec RIPped (still metaphorically). The notion of a criminal in our midst weighed heavily upon our minds. Dawn came and we fell into uneasy slumber…

During the day, while the rest of us slept, Jared (life still in hands) disconnected magadsecsup. AND YET…he could still ping its IP.

Note, gentle readers: if you remove a computer from the network, you should most certainly NOT be able to ping it. Which meant that, instead of only magadsecsup responding to madadsecsup, we had … AN IMPOSTOR! GASP! SHOCK!

We put the sleuths of LCO onto the case. At dinnertime we received word that the culprit had been found…and it was none other than Alpaca, one of the TCS computers at Baade!

THE PART WHERE THE DETECTIVE EXPLAINS EVERYTHING

Somehow, alpaca.lco.cl had been given the same IP address — one ending in 35 — as is statically assigned to magadsecsup.lco.cl. Consequently, when the Clay TCS sent information — elevation, for instance — to magadsecup, they were sometimes intercepted by this nefarious agent and never made it to the real adsec. Chaos! Upheaval!

Here I provide a helpful diagram to assist in distinguishing a genuine adsec from a sneaky alpaca.

Anyway, once the impostor was summarily booted from the scene of the IP, and Lollipop comforted and cajoled into returning to service, the night proceeded without further loss of elevation.

Emilio says the real solution is to update the hosts file on alpaca.

But! Just as we returned to science, we were subject to one last act of villainy! In a fit of rage and envy, deprived of its chance to be cool like magadsecsup, Alpaca threw a fearsome tantrum. Being somewhat larger, the actuators of an alpaca are capable of a much larger throw, and can cause much larger aberrations. And, because it’s networked, this particular alpaca managed to cause severe turbulence IN THE VERY EARTH, somewhere 33km northeast of Vallenar…

In other words, we had an earthquake! It was fascinating and bizarre! As though the world was swimming. I got to push the “earthquake button” on the adsec GUI, which Laird had pointed out to me only a few hours earlier!

Apparently the “Force enable TSS” button works by setting the shell windspeed reading to 500 m/s. Seeing that number was honestly more alarming than the earthquake…

Anyway, here are a few more helpful diagrams to cement the reader’s understanding of the situation. One is from the Chilean national seismological center. The other is…not.

MORAL OF THE STORY

Don’t judge a villain by its actuators. And watch your IPs.

SONG OF THE DAY!

Here’s a song about another creature up to no good. May all of us here at MagAOs both -C and -X have more luck with our problems than the hapless Inspector Clouseau.

My name is Amali and I come from the LBTI and while I am superlative in many ways, generating coherent sentences from real words is not one of them. However! Katie (after, perhaps, too many nights of my not-sentences) says I am allowed to just blog pictures and diagrams, so, here, CHECK OUT THESE SWEET FIGURES:

a. Here is the LBT, with salient features labeled. It is large, binocular, and a telescope. 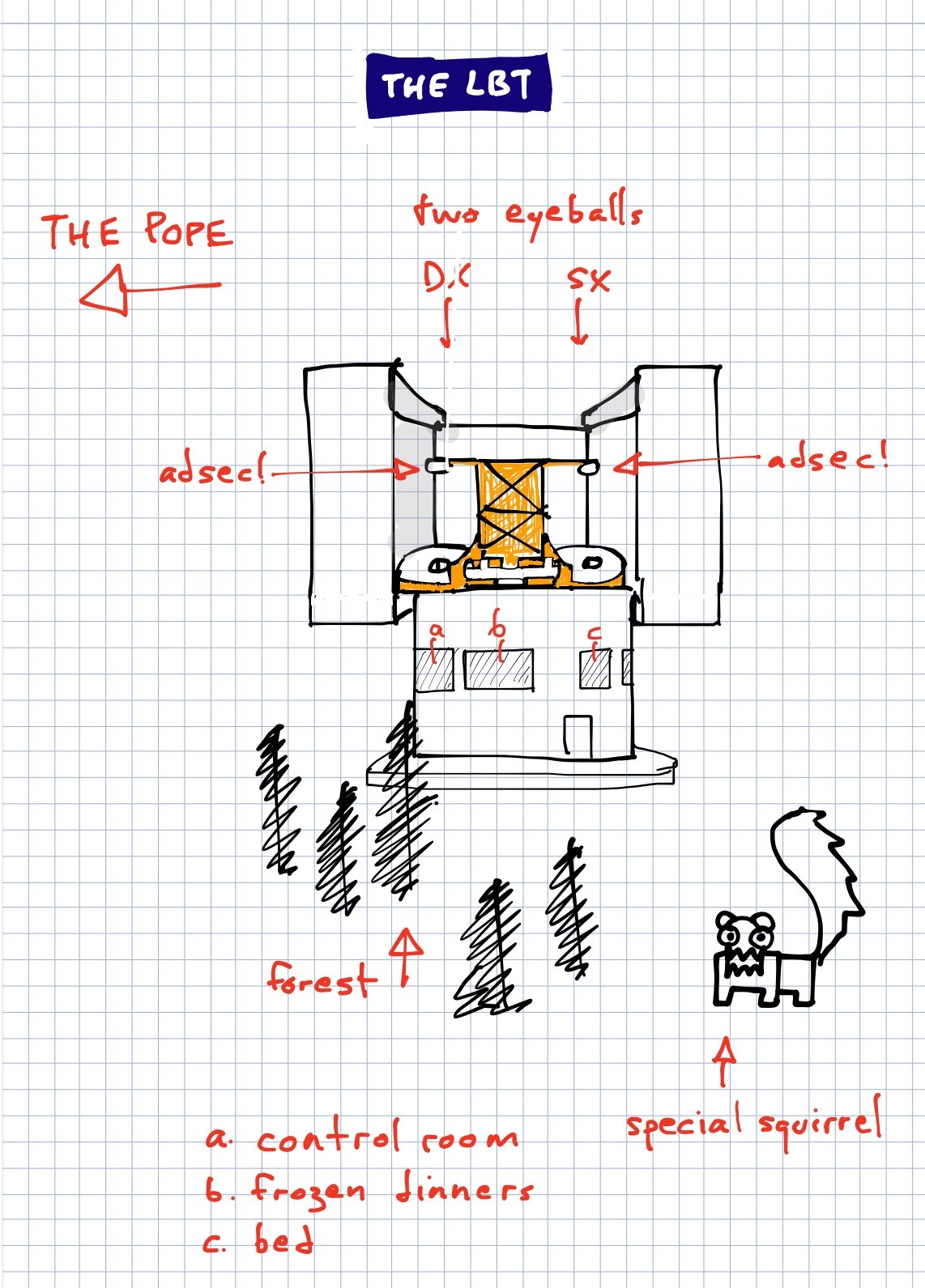 b. Here is Magellan! Also labeled. It is a Portuguese explorer dude from back in the day. 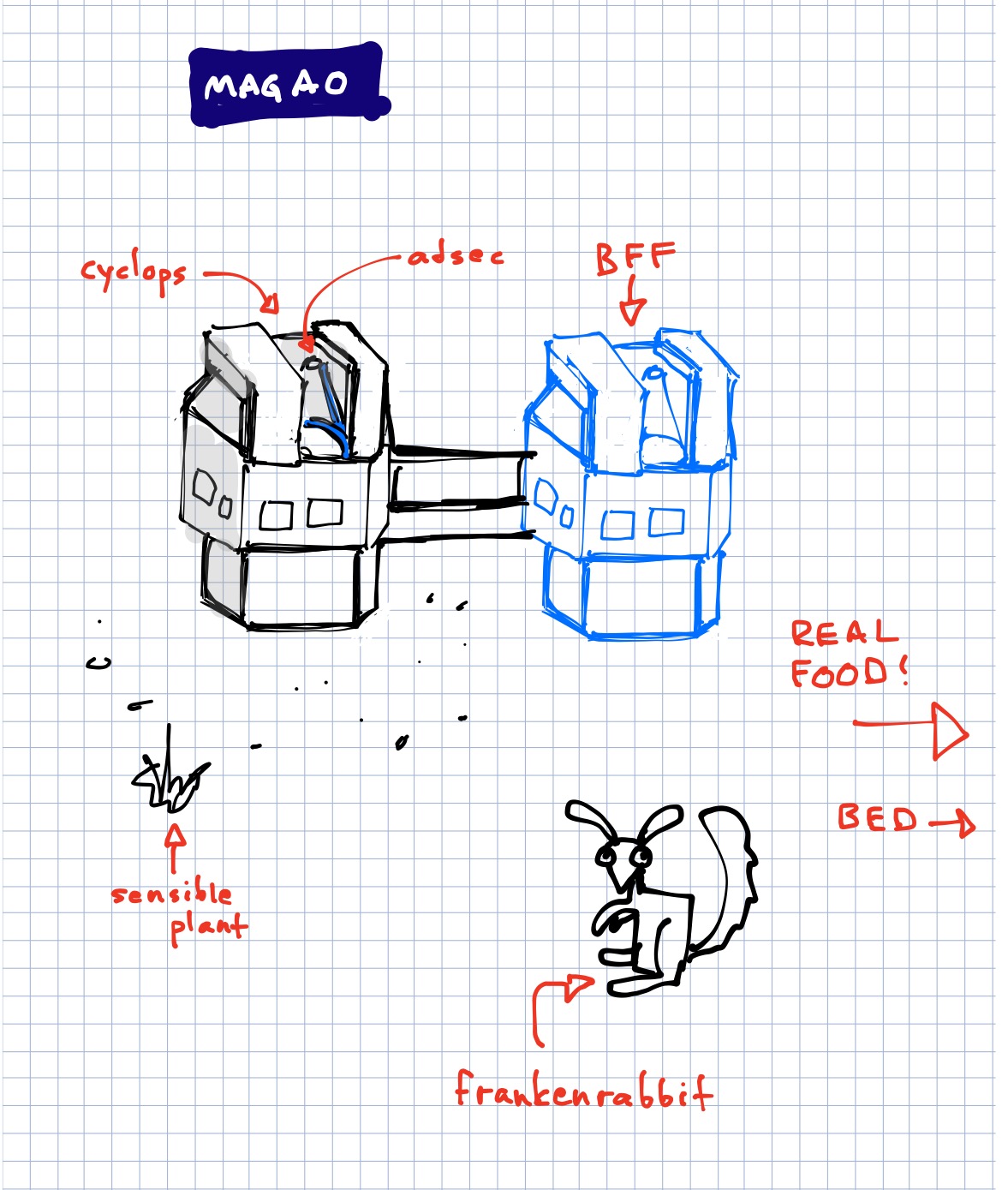 a. The LBT is, ahem, not known for good seeing. Here, for instance, is a DIMM plot from an LBTI run that I stole from our blog. The DIMM bottoms out at 0.5″, and maxes at 3″, and on this particular night we went off the charts IN BOTH DIRECTIONS so take that you snootyfaces. 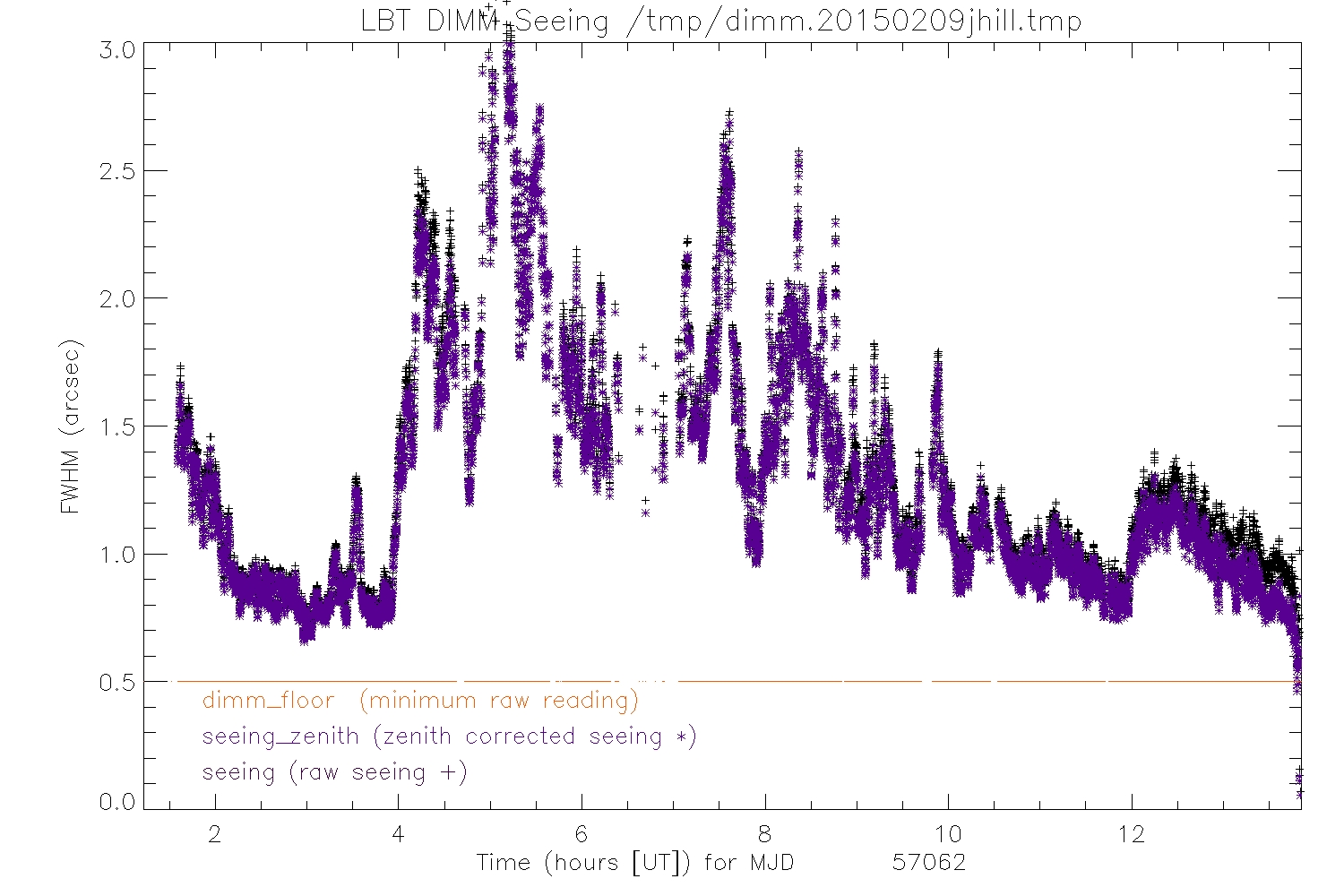 a. LBT is home to malicious flying dragon squirrels. They delight in whatsit, um, fancy word? Schadenfreude! Yes. And they accomplish this by breathing fire to mess up the seeing. 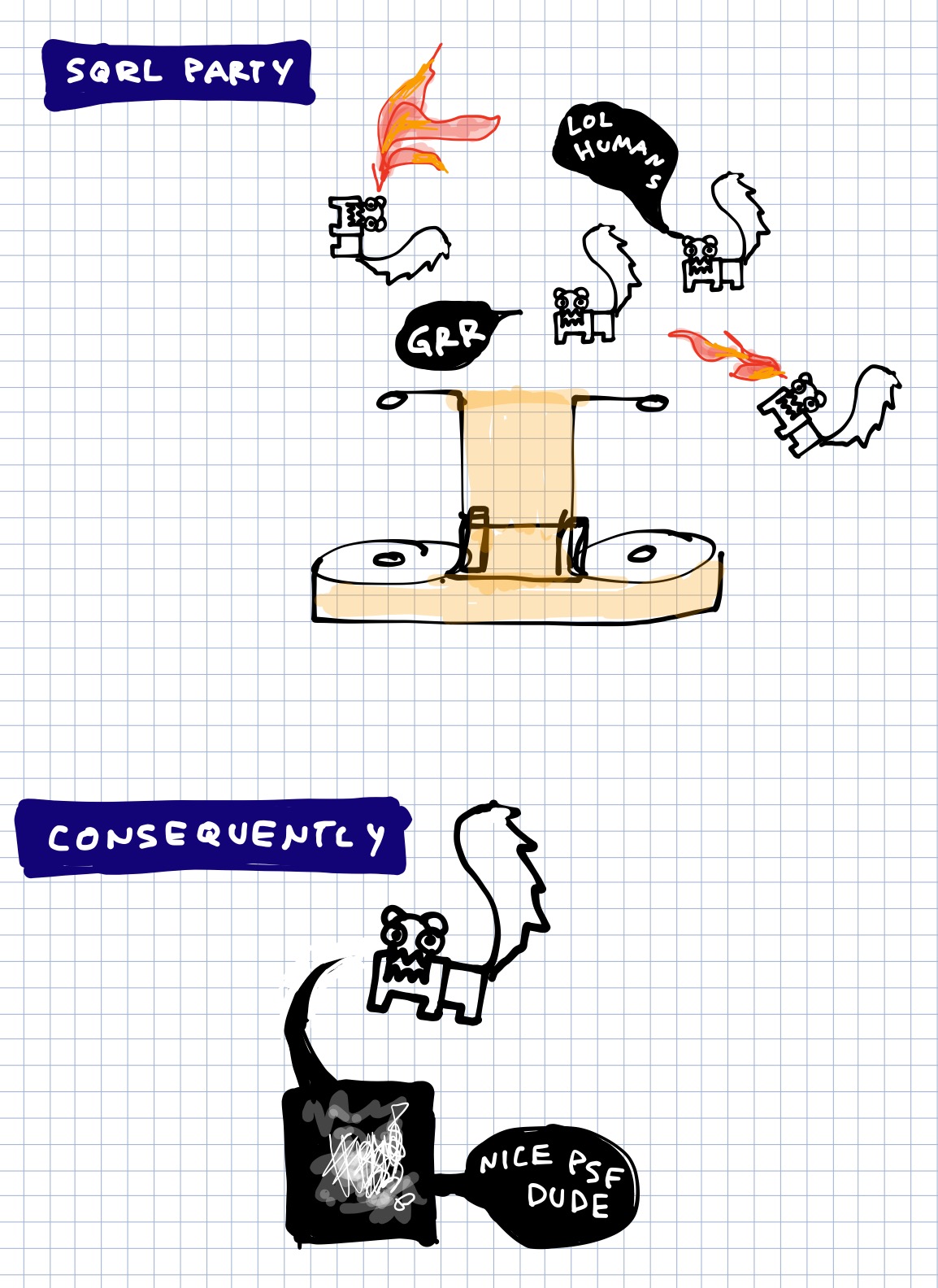 b. Frankenrabbit has better things to do. 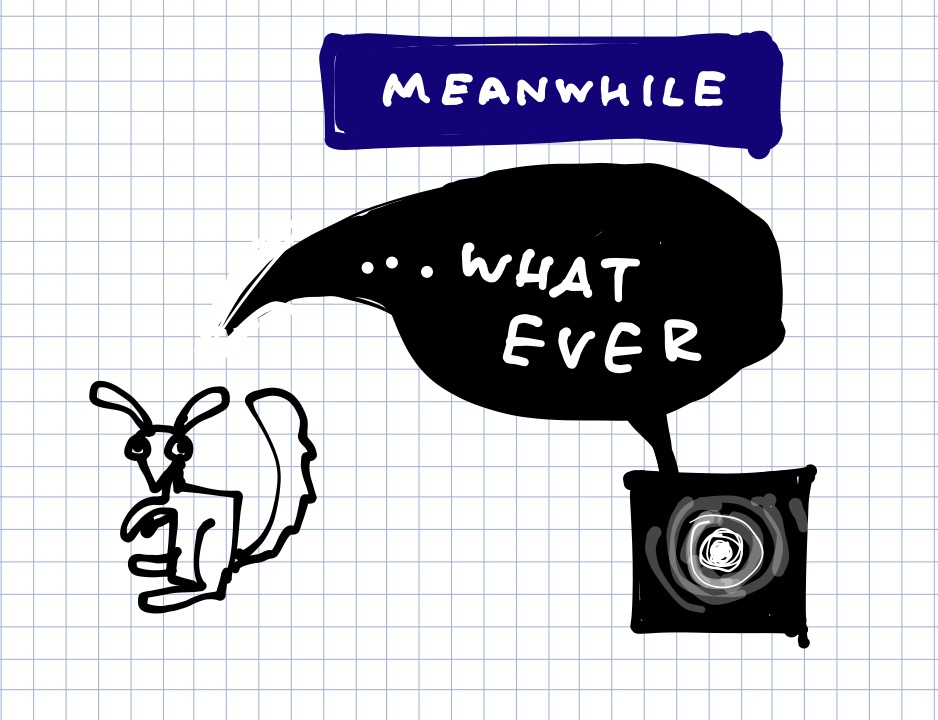 4. CONSEQUENCES BOTH EXPECTED AND NOT

a. We get this at LBT too: in good seeing the pupils get all sloshy. NO it is not TT overdriving! If anything, it’s underdriving…that stays underdriven until it’s overdriven. But that’s terrible! Good seeing should be a time of joy, not a time of tip-tilt messes and people going FIX UR GAINS KID! 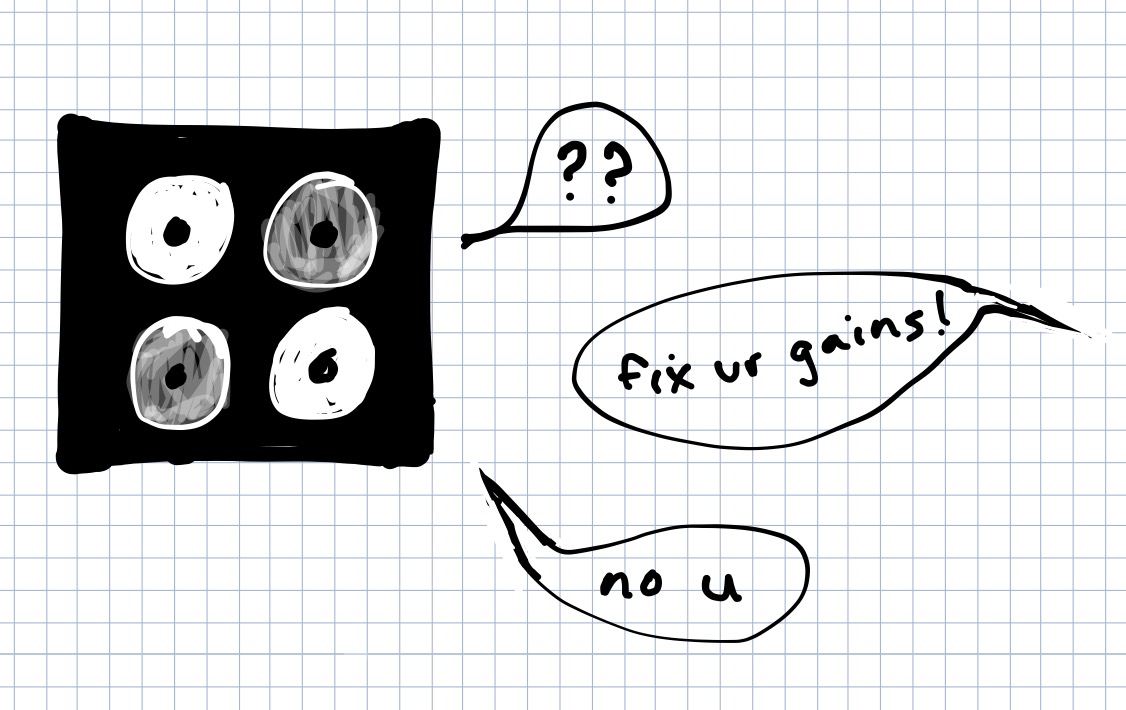 b. They start the entire AO lock with THREE BUTTONS which means you ONLY CLICK THREE TIMES and I get twitchy because things so simple can’t possibly be doing what I want, right? CLICK. MUST CLICK. CLICK CLICK. It is hard when things work! If I’d only clicked more gain buttons you wouldn’t have to look at all these diagrams! 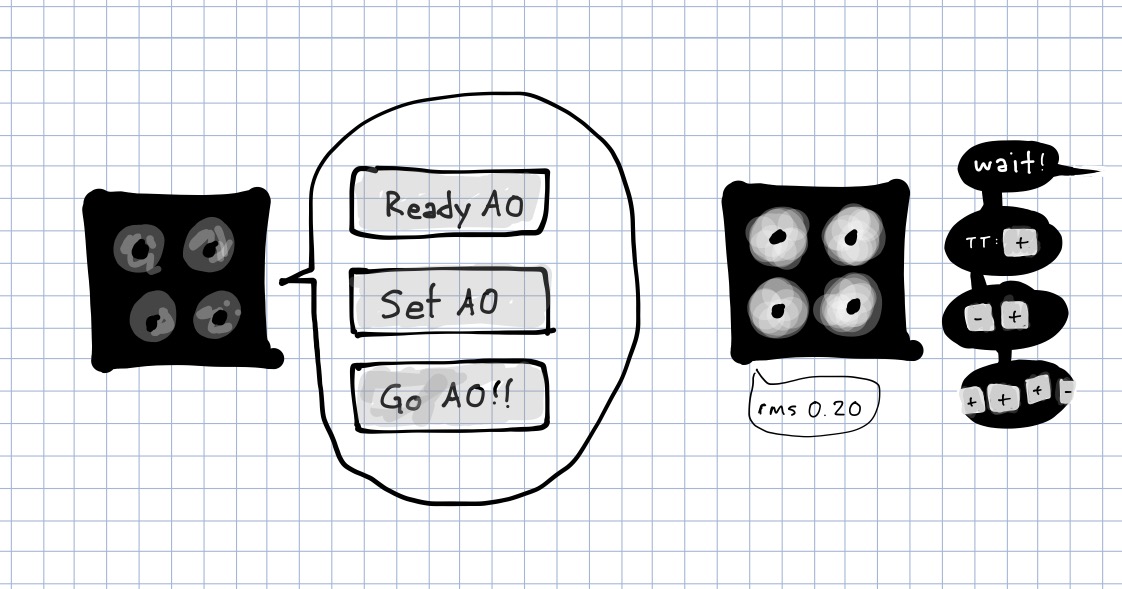 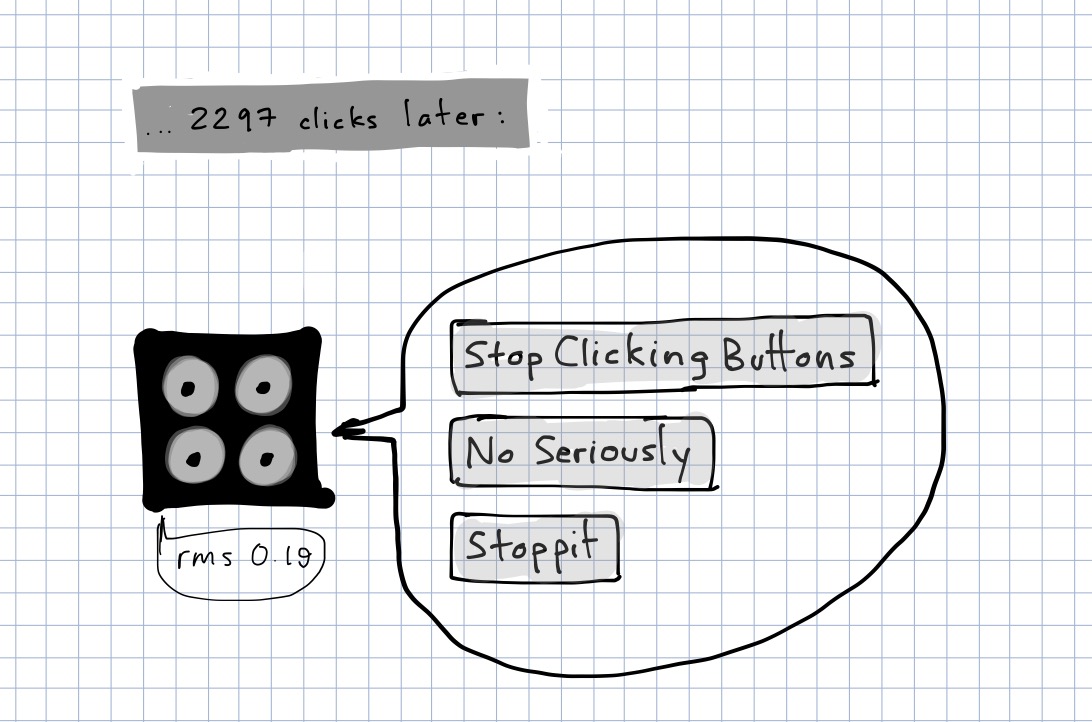 5. A LEGEND IN THE FLESH

TJ is here. I met TJ. I had not met TJ before, because he left just as I arrived, BUT he is the legendary scapegoat/mascot/dearly departed of LBTI, and I have spent many a night telling (completely made up) TJ stories. Like, remember the time TJ chased a goat into a bear’s nest and then fell off the mountain? That was epic. Anyway, my mental picture of TJ was kinda…part Daniel Boone, part Mr. Bean, and part Gangnam Style Guy.

Now that I’ve met him… I had him down pretty well, actually. 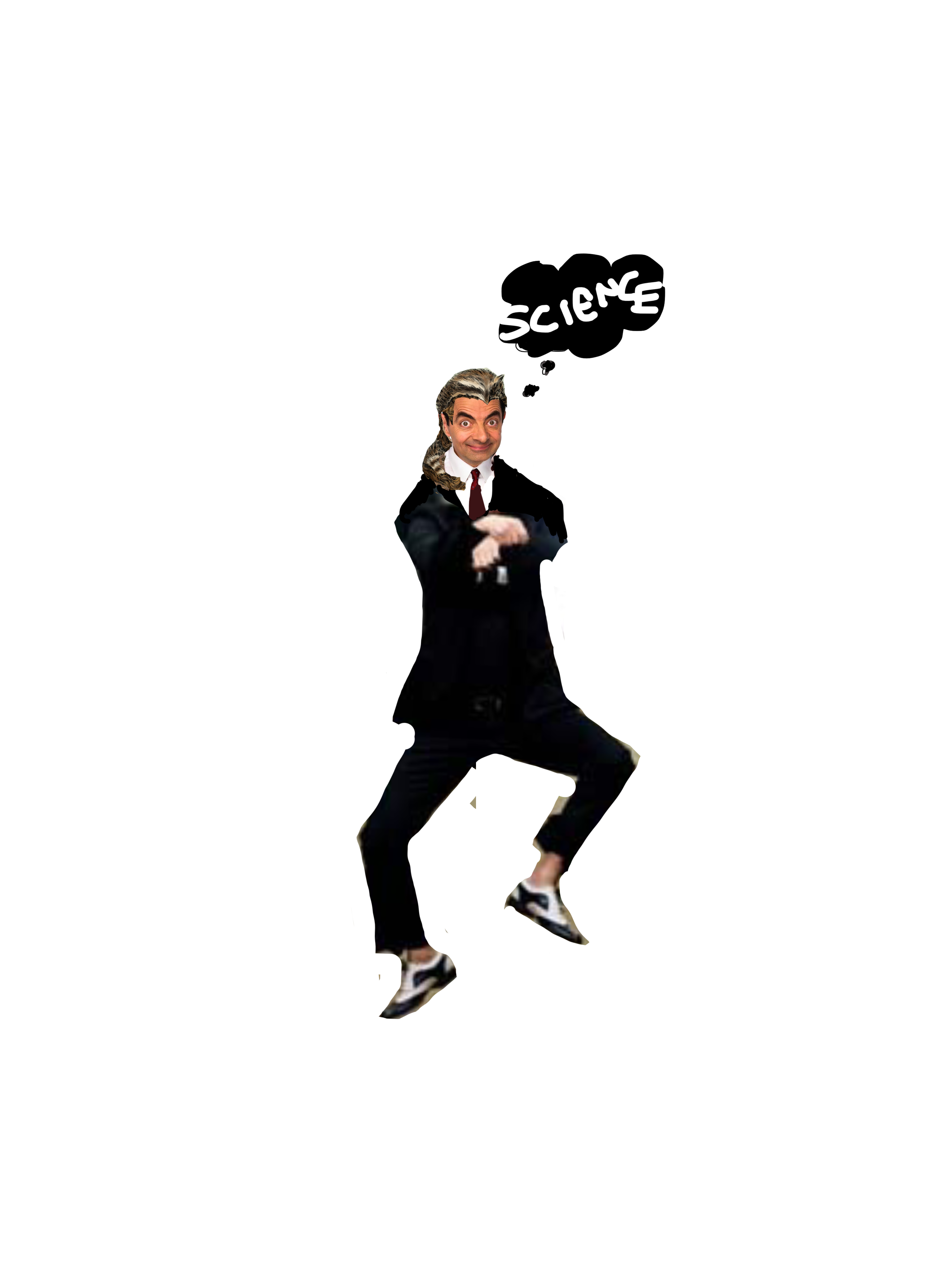 Possibly this section is best left to the science types, but WHATEVER, I had to fill up some time without clicking things, so here.

a. VISAO! We looked at Sirius and the seeing was incomprehensibly good and Jared had this mesmerizing display of a visao psf. I can’t do it justice in drawings but here: 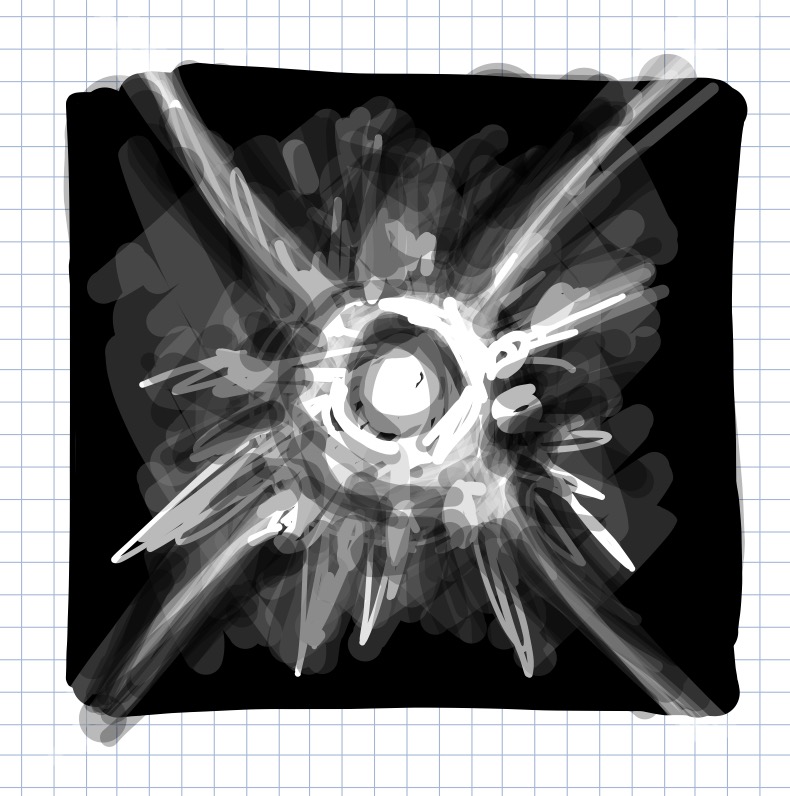 b. Back when I was a spring chicken or something, my favorite thing was the APP, even though I’d never actually seen one in action. UNTIL TONIGHT because BOOM Katie got this on Clio: 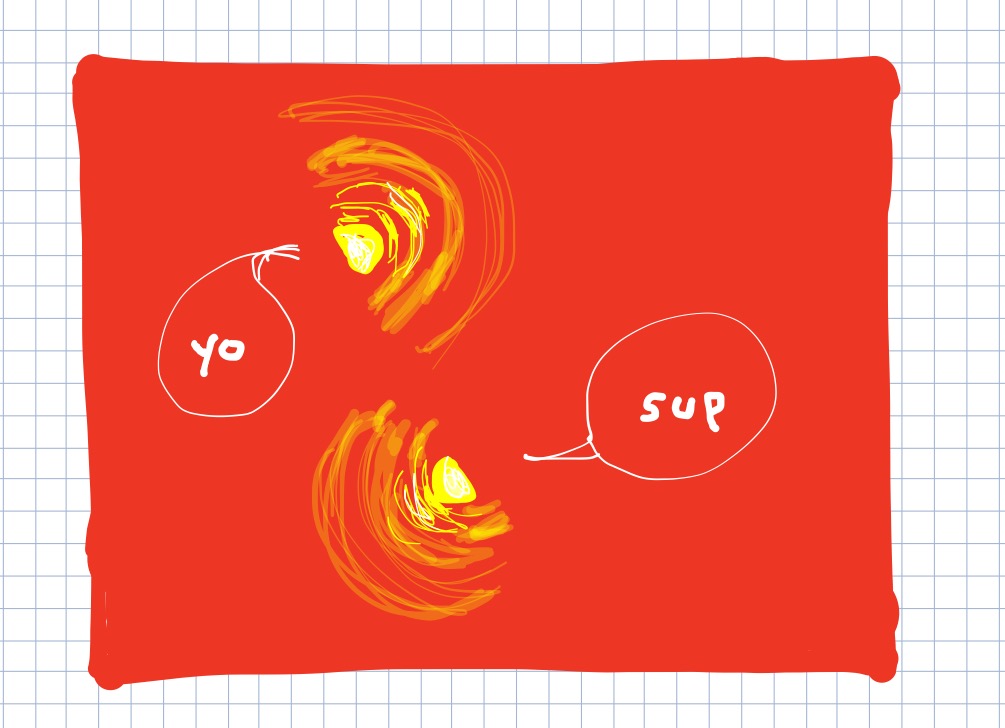 You guys, I HATE winter, what are you even doing, this is the summer world! Southern hemisphere, friends. WARM. DESERT. Like in this song. Also, the dance in the middle is LIEK TOTALLY TJ. …right?