After the embarrassing fate of only the 3 professionals at the helm yesterday, our elders decided that today was the day to teach the youth how to run things. So this post is by and for the young ones. I took the reigns of the AO correction Mega Desk and closed a loop on my own for the first time on sky!

What is my actual project here? I’m syncing! (and it’s even going alright.) As of today we’ve set up a function generator to guide our wavefront sensing camera. Right now we are just using it to remotely stabilize the acquisition rate for the pyramid WFS camera, but eventually we will connect the pyramid modulator and WFS camera for applying incoherent speckles.

On the LOWFS side, Avalon successfully closed on nine modes in Z-band. But is still battling the good fight against speed. The team is planning on testing again with the camera going faster, which will hopefully will help them towards defeating the plague of astigmatism.

Her continued experiments are not the only thing that makes her a star grad student. She also was the finder of Jared’s glasses, which he had already searched the whole mountaintop for.

Jialin, after a few day’s heroic efforts on our observing schedule, got to her first science target tonight. Though seeing deteriorated, we were still able to get several hours of well corrected data and even resolved a disk.

Warren continues to survive marathon PIAA alignments, conjugation errors, and testing. Today he worked further at better alignment and characterization, but did not respond to requests for further comments.

Our merry crew continues to chug along, as our engineering nights start to transition to science and our system is better prepped than ever.

Finally, our first science result of the run, an extended source brought to us by Dr. Haffert that we collected yesterday.

“If you look at the DM, all it is is sparkles!”

as it should be

our optics bench is quickly running out of room

“Eden, some things Jared says can be safely ignored”

a growth moment the PI did not disagree with

“It’s not loose, it’s a delicate construction. It’s a miracle that it works at all.”

from the creator, about the creation

“I feel like all of your sayings are … farmish”

to someone who is farm-adjacent

regarding PIAA, the everlasting mystery

We cannot name the new workstation the “Coronagraph Operator Computer”

“I just get a bunch of old men optical engineers viewing my LinkedIn profile. Where are all the fun singles in my area?”

when job hunting is your only social media exposure

“I am currently rederiving s- and p-polarizations for waveguides”
“yeah, that’s a good thing.”

no sympathy for cramped hands

a princess and the pea moment

“Would you be terribly offended… if I spooned you?”

regarding why observatory parking space are back-in only

“What kind of bananas university do I belong to?”

“If anyone is going to eat my pear, it’ll be Warren”

playing defense on the midnight lunches

Song of the Day:

From a dad rock get away to having the whole world on your shoulders.

After an eventful 24 hour day, a record might have been broken at the Las Campanas Observatory; we have welcome 3 more University of Arizona scientists, making a total of 12 Arizonians on the Chilean mountains.

With Avalon’s efforts, 10 low order wavefront sensing modes were closed on sky for the first time! “10 might not seem like a lot, but don’t most close on 2?”

Science targets were observed while working towards engineering goals throughout the night. Sebatiaan captured beautiful images of R Aqr. If you’d like to see them, like, comment, and subscribe to this blog to hear the newest updates. Warren continued on PIAA alignment and tested it on a binary, possibly multiple star system, HD 20121.

PDS 201 is the first target observed for the Max Protoplanet Survey on this run. With the great seeing around 0.4, the 3 hour observation through its transit resulted in the total of about 80K high quality images. This also means a grad student will be reducing data happily throughout the next day. And the night ended with some more effort in engineering, characterizing vibration and making Strehl measurements.

While in the kid’s lounge… some might say they are having too much fun.

Since we went on a journey yesterday, let’s go on a getaway today!

From the long days comes an even longer night with the first engineering night of the run. What follows is a brief recount of the 24 hours spent getting MagAO-X running. Today started bright and early with getting MagAO-X up the mountain.

The final 200 meter climb resulted in the instrument finally getting to the summit and installed. The final vertical climb up the elevator was the fastest process of the whole day! It only took a mere 2 minutes, time lapsed in a cool 12 seconds below.

Once on the platform a myriad of tasks were then taken to get it into place. Starting with disassembling the cart and getting it onto the legs. After giving MagAO-X its legs back and getting it into its final position Warren, Eden, and Avalon graced us with this musical number, dubbed “Carol Of The Safety Toe Shoes”, to commemorate the moment.

After this great composition the group aligning the instrument took a break as the Baade telescope posed for us! (It totally wasn’t because of some press)

After seeing BAADE the team took a slight detour into the auxiliary building, specifically to see where the primary mirrors of the Baade and Clay telescope are re-aluminized. The students had fun with the acoustics!

We of course had to be inspected by the burros, they approved of our work.

And finnally after a long day of work the day ended and beckoned forth the night. So, as is per tradition, the team got together and was able to get one final photo with the last vestiages of light.

And thus as day faded into night we continued to work. There were some communication issues that were still working on, but Warren was able to align PIAA. We were also able to get on sky later in the evening. The image below is an image of our first target of the run Theta 1 Orionis B.

So with a long 12 hour work day which continued into the night we were reminded of the song “Don’t Stop Believing” by Journey. As even though the team was presented with different challenges through the day; we never stopped believing. 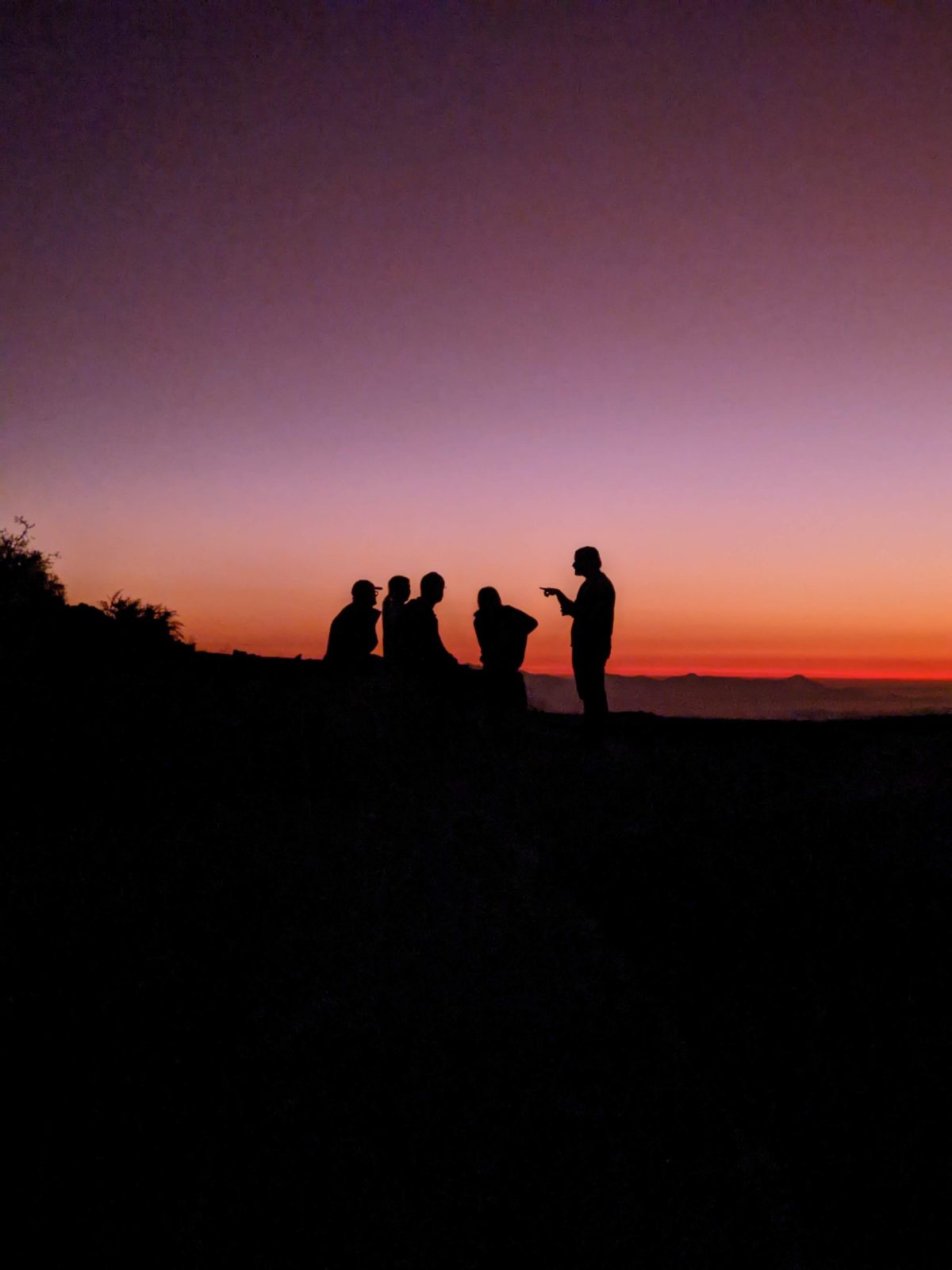 The long days spent waiting for a resolution to the trucking strike were unwanted but provided unusual tranquility on a mountain normally full of activity. Starting work yesterday morning brought welcome relief to have control back in our hands: turning wrenches and aligning optics was made sweeter by the ennui and uncertainty we had experienced waiting for our system to arrive.

It is to the credit to the group, then, that we did not trip over our own feet in excitement to have something to do, and instead an aura of calm pervaded almost all actions of the days. Like a well-rehearsed dance, our shifts in the cleanroom prepared each subsystem for integration onto the larger bench, and we were quick to characterize problems that will be addressed in days to come. The two days for preparation were unusually brief: because of time constraints we needed to run through our system characterization without incorporating the air-support mount or high-actuator count deformable mirror. Despite the outward expectation of hurriedness, we finished both days with remarks about how quickly everything had gone. Stepping outside this evening into golden sunset light with our instrument packaged and wrapped for the telescope was uniquely rewarding.

This calmness amid the bustle of activity would do well to linger into the next few days. Tomorrow will be the busiest day of the trip, loading our precious cargo onto a truck early in the morning for the final 200 meter climb to the telescope and then solving wavefront control problems through the starlit night. Today, then, was an important day to appreciate the quiet moments before the tempest that will challenge and enthrall us tomorrow.

Almost all the LCO animals joined together in making today a good day to remember. We had visits from the donkey herd:

The guanacos also made a rare, close to the lodge appearance before bedding down on the hillside south of the telescopes.

And certain, unnamed members of the group were hassled by menacing birds between homework assignments.

Inside the lab, Jared and Joseph started the day with heroic efforts to troubleshoot problems on the erstwhile moody ICC. It seems possible that problems may have originated during bumpy transport; we are all hoping that we’ll soon forget there was ever anything wrong at all.

Afterwards, Eden, Sebastiaan and I each got to play with our instruments but work was hampered in part by bad PSFs caused by some combination of pupil shift and no tweeter mirror. We were glad for an online celebrity guest troubleshooting appearance from our very own Kyle van Gorkom; hopefully getting the instrument onto its air support in the telescope will restore beam paths to closer to what we had seen in Tucson.

As quickly as it had started, it was time to pack everything up and get ready for the final ascent tomorrow. Avalon’s instincts as master plastic wrapper sprang into seasoned form, and good teamwork led to a record decabling and preparation.

Finally, our work finished, we enjoyed a very pleasant team bonding experience lingering outside as the evening glow turned into night. Amid the certain hubbub and work of the coming days, it was lovely to pause and appreciate the quiet stars twinkling in the night, before peering deeper to unravel their mysteries.

With relief and anticipation we look forward to the busy days to come, but also look back with fondness on our unexpected, quiet days on top of the world. Time spent walking the gravel mountain roads holding dual feelings of awe and angst consistently evoked the music of Townes van Zandt, and I’d be remiss to not include a song of those moments before our nostalgia is swept away by the activity quickly upon us.

MagAO-X is here on the mountain, and we have been working to unpack it since its arrival at 10am. As such, anyone looking for coherent prose in what follows is warned to expect disappointment.

We got pics tho.

Unpacking is dirty work, but it’s all worth it.

But also “astronomy with cleanroom gowns”

There were occasional meetings of the two, even:

The P.I. hugged his electronics rack once again:

MagAO-X let it all hang out:

The success of MagAO-X quite literally rests on students:

There was also a small earthquake, but it’s all good.

Song of the Day

We had 1975, now we got 1977. Ana Tijoux is a Chilean-French MC I used to listen to long before I ever visited Chile.

Trying to rap along with that is challenge mode for maintaining your Spanish-speaking skills. (I used to be able to…)

As a bonus, here’s her 2020 protest song that taught me “guanaco” is slang for the water cannon police use to disperse protests in Chile (because they both spit at you, get it?)