It has been a great recovery for MagAO from the terrible glycol leak of last year. We have now completed our first science run and it was a big success with a completion of the February targets that we failed to get last year now completed. As readers of this run’s blog posts know it was a tough run with losses of 2 DSP boards for the ASM and the loss of the PI TT mirror. But we fixed what was broken and carried on doing science. In fact, the last 5 days were straightforward with full AO uptime, and prove that MagAO is fully back in the science business.

So after 21 days and nights at LCO Jared, Katie, and I finally left LCO today. But first I got up very early because the most important piece of equipment in all of LCO is the 20 year old ISUZU flatbed truck. It spends its life running around the observatory and driving to La Serena and back. It is the only way to get the ASM from the Clay telescope to the clean room (some 500 years down the road from the telescope) where the ASM is stored when it is not used. The ISUZU had an hour free this morning to bring the ASM down the mountain! So I was excited to get the ASM down from the telescope.

Yesterday we had a super full day of complex crane and mounting and cabling work (see yesterday’s blog post by Katie). Through it all Juan Gallardo has overseen almost every single mount and dismount of Clio, and NAS, and ASM that we have done over the last 6 years! The safety of MagAO is in great hands with Juan. Thanks Juan!

I should note that the head mechanics Nelson and Felix are the key people that help Juan with all these crazy difficult tasks. Since Nelson and Felix work different tournos (week long shifts) you never see them together (except at the magical Tuesday morning when the shifts change) so here is the photo of these two amazing individuals below. These are the only guys I trust with wrenches and 5/8th bolts over my optics.

Now the ASM is all packed away till the next run. It is nice to being back to doing science with the ASM after all the repairs of the last year.

And Katie put Clio in its special office…

Now Jared and Katie are finally getting some well deserved rest in the LAN VIP lounge (where I’m writing this post).

Last night was our final night on-sky in 2017A. Laird went down around 10pm — hopefully he got to sleep fairly quickly, as he had to be up at 7:30am for a long day’s work. Jared went down around 3am — and he had to be up around lunchtime to help Laird. I’m not needed as much for the dismounting of the instruments (other than Clio), so I was the one to stay up running AO for T.J. and helping him trouble-shoot VisAO. As soon as T.J. recorded his final photons at the end of the night, I shut down the wavefront sensor, the ASM, VisAO, and Clio. Then I disconnected Clio from the telescope, coiling all its wires up for safe transport, and went to bed. Meanwhile, Laird was finishing his breakfast, and came up with the day crew to remove Clio and the ASM from the telescope. Then when Jared woke up he helped Laird de-cable the Nas which they then removed. Finally, I woke up and helped clean up and put away our various tools and sundry. Now it’s 1am and I’m awake enough to post through the struggles of the weak wi-fi in buildings B-9 and B-10.

When I walked up today I saw a herd of 6 guanacos — 4 adults and 2 babies — on the hillside to the East of the road up to the Astronomer’s Support Building. I didn’t have my phone with my so I didn’t get a picture, so I just have to remember what I saw (as my Mom says). One guanaco was especially close to the road, munching on a bush — when I saw it I thought it was Gary Galileo Guanaco — and then I saw the other 5 — if it was him, he’s never brought his family before! The 2 babies were hanging out with 1 adult (their mom?) and as I walked by the first guanaco (Gary?) walked over and stood by them protectively (their dad?). The babies hid behind the other guanaco as I walked by, but they both turned their heads to watch me pass. If your internet is working very well, maybe you can find some baby guanaco pictures.

We are still talking about spiders today because that thing was huge and scary. But Laird saved us from the spider… or the spider from us…

First here’s Laird’s video he took this afternoon while he was trying to convince it to leave Clay:

And then pix from Jared from last night and Laird from this afternoon:

It’s our last night on the telescope and T.J. enjoyed some nice conditions:

Vizzy is still hanging about the clean room.

For the past few days we’ve had songs about fireflies, a preview about spiders, and a song by Shakira. So for my attempt to follow the blog rules, this girl has got it all:
Britney Spears’ “Toxic” (evoking the spiders through the Chilean Rose Tarantula, which is not actually toxic, but it can shoot its spines into your eyes so you should treat it like it’s toxic), Owl City’s “Fireflies”, Shakira’s “Waka Waka/This time for Africa”, as well as bonus Nicki Minaj’s “Where them girls at” and Ke$ha’s “Your love is my drug”!

When you’re on an observing run, the word “spider” comes up fairly often–usually people are talking about the support structures of the secondary mirror. Tonight, “spider” had a different meaning because THERE WAS A HUGE FREAKING SPIDER IN THE BUILDING. Here is a picture showing just how big this thing was: 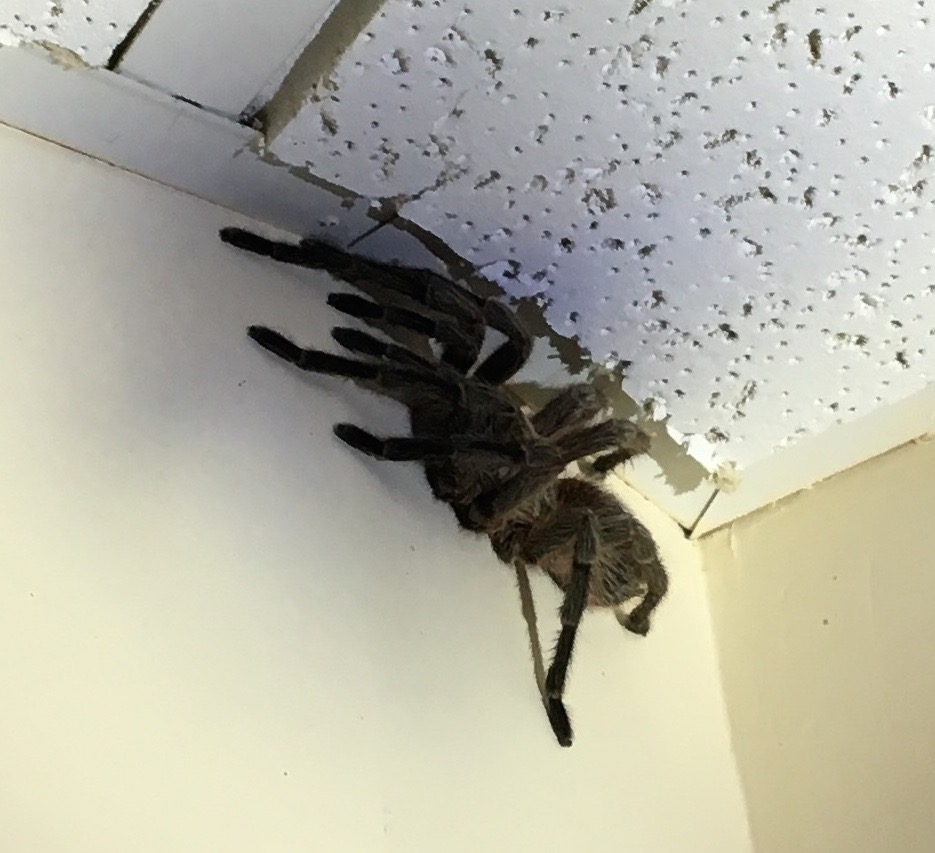 By the way, can you guess which of the three walls is the floor or ceiling? You get bonus points if you said the top part with all the holes in it is the ceiling. So this thing was hanging out near the ceiling right outside the bathroom. I went downstairs around midnight, saw the spider, and immediately turned around. Everyone is afraid to use the lone bathroom in the building now. People are scared. There’s talk of rationing our food because we may not be able to leave.

Why not get rid of the spider, you ask? Gently nudge it away and outside? No, it’s big and scary, and hairy. Also, have you seen the movie Arachnophobia? You don’t mess with spiders this big. Oh, and as I write this, about 4 hours after we discovered the spider, it is still sitting there. Brooding. Plotting. Biding its time.

Up in the safety of the control room, I continued to make observations for my programs. Laird has been my AO operator, and this means we often get into ridiculous conversations. For example, yesterday we calculated how fast Santa Claus would have to travel to visit every household in the USA in one night (about the speed of an asteroid, apparently). I have also been berated with Laird’s usual statements like “I’ve never had a grad student/postdoc who thought you could just clean a refractive lens to get rid of ghosts.” I was also reminded what a “hi-archial” system is.

Despite the high humidity, observations are happening and good data are being taken (except when you accidentally set up VisAO to take 6000 darks during an exposure, and by you, I mean me).

I am going to once again bend the youtube song rules by linking to the trailer for “Arachnophobia.” A terrific movie that will make you afraid of spiders if you weren’t before, and if you were already, you’ll be even more terrified and fear even the tiniest ones for life. So yea, definitely see this if you haven’t.

Las Campanas is my favorite place to watch sunsets. Unfortunately, we only have one star to watch rise and set each day–look how lonely it is.

While we’re observing we are forced to fortunate enough to get to watch the sunset and sunrise before turning in for the day.

If we lived on another planet, we might not have to stay up all hours of the night to see both sunrise and sunset. If we had multiple stars in our sky, sunrise/sunset might happen simultaneously, as it does on HD131399Ab for part of the planet’s year (which lasts about 550 Earth-years). This video shows what it might look like if we had three stars in our sky (which would make astronomy very difficult, by the way).

In fact, the nearest exoplanet to Earth is also in a triple star system. If humanity ever manages to travel to and overcome the challenges to life on Proxima Cen b, our descendants may well get to enjoy such an experience.

But alas, we are exoplanet imaging scientists, and Proxima b orbits too close to its star (and is too cold/not massive enough) for us to be able to image it. Thus, we’re sticking with HD131399. This is the first time that we’ve looked at this planet since we found it, and we’re really excited to learn more about its exotic orbit between its stars, and also more about its atmosphere thanks to MagAO’s infrared wavelength coverage. As you can tell, the planet is very faint compared to the stars, and the image requires special processing to pull out the faint signal from the planet. Since I stayed up all night taking the data, you’ll have to check astro-ph in the near future to see the new MagAO image of the planet. To avoid ostracization, I’ll refrain from posting the SPHERE image of the planet on the MagAO blog.

The rest of the night we spent looking at dusty disks around young stars. As giant planets form they open gaps in their disks, providing a means of targeting systems that likely have planets that can be imaged. MagAO is unique in that it can sense the light of very young planets in the midst of their formation (see, e.g. the MagAO image of LkCa 15). Tonight we tried one of my favorite disks, HD100453, which hosts a gap approximately the size of Uranus’s orbit around the Sun. Keeping with the theme of multiple suns, HD100453 also has a second sun, orbiting just outside of the above image and driving the spiral arms in the outer disk. This is one of the final disks that MagAO is exploring for planets as the team completes their legacy Giant Accreting Planets Survey (GAPlanetS).

The data are in and we’ll be working on them steadily over the next few weeks to bring you the results! Since we can’t have multiple sunsets on Earth, I’ll leave you with a galaxy-rise of a hundred billion stars as consolation (above the other Magellan telescope). And finally, the song of the day (back to the emo-electro fireflies theme – I doubt that Jared will find this less annoying than Owl City):