(This blog is a cross-post from the LBTI blog.)

What did you do with your leap second? Tonight we stared at thick monsoon-y clouds for an extra second. And then (many hours later) we went to bed.

There was also going to be a spectacular conjunction of Jupiter and Venus, but I couldn’t see it behind the lightning. Here’s a panorama from the balcony at sunset:

It was a bittersweet night as we say goodbye to Vanessa, who has put her considerable skills and efforts to work making the LBTI run efficiently, over her past several years as a PhD student at Arizona. It is time, and she is graduating and moving on to a postdoctoral position with the Gemini Planet Imager at Stanford and Livermore National Lab. Thanks to Vanessa’s hard work and dedication, new people such as Amali, Eckhart, Carl, and Jordan are being trained so that the whole operation can keep running once she leaves:

As for myself, I came on this run to compare and contrast the operations and instruments of MagAO and LBTI. I have just recovered from a 6.5-week MagAO run and so it is fresh in my mind. First of all, let’s marvel at all this monitor real-estate that LBTI has. Not only are there 4 monitors for the AO guis and webpages, but there is a monitor overhead with the weather station, and an extra little L-offshoot of the desk to set your laptop for taking logs:

Just for a comparison, I set up the AO windows MagAO-Style on 2 monitors. Note that I placed my laptop in front with the logsheet, and my iPad as the weather station, and the dinner plate — to really give you an impression of MagAO style. LBTI doesn’t have the Fast-Mirror Viewer but they do have the Technical Viewer and the PT Spiral so I put those in that place:

Now, when you think about it, the LBT has two 8.4-m mirrors (and 4 monitors for each AO system for each mirror) while Magellan has one 6.5-m mirror. So that means LBTI should have 1.67 times as many monitors as MagAO. I guess they rounded up.

So what have I learned, comparing and contrasting these 2 complex systems?

Well, while our AO systems under the hood are almost identical, the start-up and loop-closing procedures are quite different. Take the case of acquisition. With MagAO we slew to a target, the TO does a Shack-Hartmann with our guider, and then hands off a fairly flat wavefront to AO — then we preset the reconstructor and binning, and close the loop with a 10 modes gain vector, and finally hit it with auto-gain for a final closed loop. LBTI doesn’t have a guider, so there are low-order aberrations that the AO operator must take out by hand, by applying nanometers of wavefront to M2. This has to happen before the loop closes, so it is part of the acquisition the AO operator does. Finally, the preset for LBTI is a bit different than the MagAO preset, and seems to be a bit buggy in terms of timing out, so the AO operator often sets up the reconstructor and binning by hand — which is also easier for LBTI because most targets are the same brightness. The 10 modes loop is a reconstructor not a gain vector, so that’s why it has to be set by hand after acquisition, preset, and static aberration correction. So a very complicated system in a different way.

LBTI has many complicated operator interactions, since both the TO and the AO operator can control the ASM. It also has a “200% efficiency” element as we have with MagAO, in terms of 2 science cameras that can operate simultaneously — in this case LMIRCam and NOMIC. This leads to some of the same conversations as we have between Clio and VisAO, where the LMIRCam and NOMIC operators communicate to make sure each has obtained the data before nodding or moving to a new target. However, the two telescope PSFs showing up on the science camera makes for additional complexity, in that the LMIRCam operator must do a test nod to figure out which PSF is which.

There are a couple things I miss from MagAO. One is the Fast Mirror Viewer that Alfio made to show the peak mirror commands vs. time — it has become my go-to plot for monitoring the loop status. Here it is after an earthquake last month:

Another thing I miss is the chefs. Someone turned down the temperature of the visitor fridge at LBTI yesterday and the food was warm and smelled bad…

But what does LBTI have that we could use at MagAO? Vanessa, Amali, and the team spend a lot of time creating useful explanatory diagrams, so that the wiki is quite comprehensive and informative. Take a look at this diagram Amali made tonight — incredibly useful for diagnosing wavefront errors on the pyramid:

A lot of work has gone into making LBTI operable remotely from Tucson, so things like the power controllers for the AO hardware are accessed via a webpage. Part of Vanessa’s dissertation has been working on non-common-path aberrations, and tonight she showed me the method for determining optical gain, which is variable and thus necessary to determine before the amplitude of an NCPA can be known. For another thing, the telescope-level plots are extremely thorough — for example, I can lookup the temperature of the steel struts in the telescope structure. And finally, the LBTI has 2 primary mirrors, 2 AO systems, and many modes — from IR imaging to nulling interferometry. It makes for a complex instrument with a lot of amazing capabilities! As soon as these clouds clear up.

The MagAO team have left the mountain, and we’re on our way home to Tucson. We don’t have much internet right now — you’ll have to live without more pictures and a song of the day until we’re back in range.

Last chance for the 2015A song of the day and it had to be this one:

Well the system is back in storage, and we’re good and ready to get out of here.

We couldn’t go even one last day without troubleshooting something. We did a bunch of testing on our recalcitrant “X stage” motor, including spending some time on the phone with an engineer at Copley Controls. It looks like we made some progress, but unfortunately we won’t know until November. One important detail is that it almost certainly isn’t my fault.

We also attacked our atmospheric dispersion corrector (ADC), which has been suffering from some mechanical interference (that means parts rub against each other and so it stops spinning). We figured out how to shim one of the motors, which made a big improvment. Fingers crossed for next time.

It felt really good to be awake with the Sun up. We got to see parts of LCO we had mostly forgotten about.

Well, the last FITS data files of 2015A have been read out, and MagAO is in the process of being tucked away for a cozy rest until 2015B. I had the last night of the entire run, and just like back in November, we observed well into morning twilight — no photon left uncollected! I’m so excited to see what these data have in store.

Here are some highlights from the last science night:

– We finished the last night on MagAO with nice steady 0.5” seeing — really great conditions, especially at the end of the night. Cerro Manqui and its surrounding atmosphere continued to smile upon us!

– Pyramidal chocolate (Toblerone): the ideal confection to consume while using a pyramid wavefront sensor. Thanks Katie and Laird!

– I got to run Clio and the AO system at the same time! (briefly.) I’m not up to TJ’s triple-threat AO-VisAO-Clio skills yet, but hopefully next time I can learn to run VisAO too. 🙂

– Jordan learning to run AO with Laird, and running the system for my program (awesome tiger hat sadly not pictured), which was super helpful.

– Sniffles throughout the control room… Not a positive highlight, but since almost everyone caught the same cold virus, we did have quite the symphony of sniffles going on.

– Jared unwittingly demonstrates his VisAO spidey senses: To start putting everything away, the team had staggered waking shifts: Laird at 8 am, Jared at noon, Katie in the afternoon (after she ran VisAO and AO for me at the end of night). Therefore, everyone departed the summit at different times during the night. Jared went back to the dorms and to sleep around 3-4 am, but woke up spontaneously a couple hours later and asked us how things were going… precisely when we ran into some camera/GUI issues with VisAO. The uncanny timing can only be attributed to his innate connection — shall we say a sixth sense — to VisAO and subconsciously hearing its cry for help.

After taking the last dark frames of the run this morning, I went up to the chamber to see what Katie and Laird were doing to put Clio away and start taking off the adaptive secondary mirror. Many hot-pink zip ties were detached (the zip ties holding up wires/cabling are color-coded, so you know exactly which ones to remove at the end of the run — so clever!)

I also got to see the telescope tip down, as Laird and the many amazing engineering folks started to safely remove the secondary:

Then, well into the morning, it was time to head back to catch a couple hours’ snooze before taking the van back to the La Serena airport.

Jordan and I had the same flight to Santiago, so we had some extra time to grab lunch at the airport (best place to get gigantic sandwiches!):

As Jared and Katie mentioned in the blog, I arrived a few days early to help with observing before my night. Other highlights have included:

– The first-ever sunny day I’ve seen in La Serena (from the Las Campanas Observatory headquarters, where the astronomers wait in between landing at La Serena and heading up to the summit):

– Some fantastic sunsets (Venus too), though not given proper justice with only my cell phone camera: 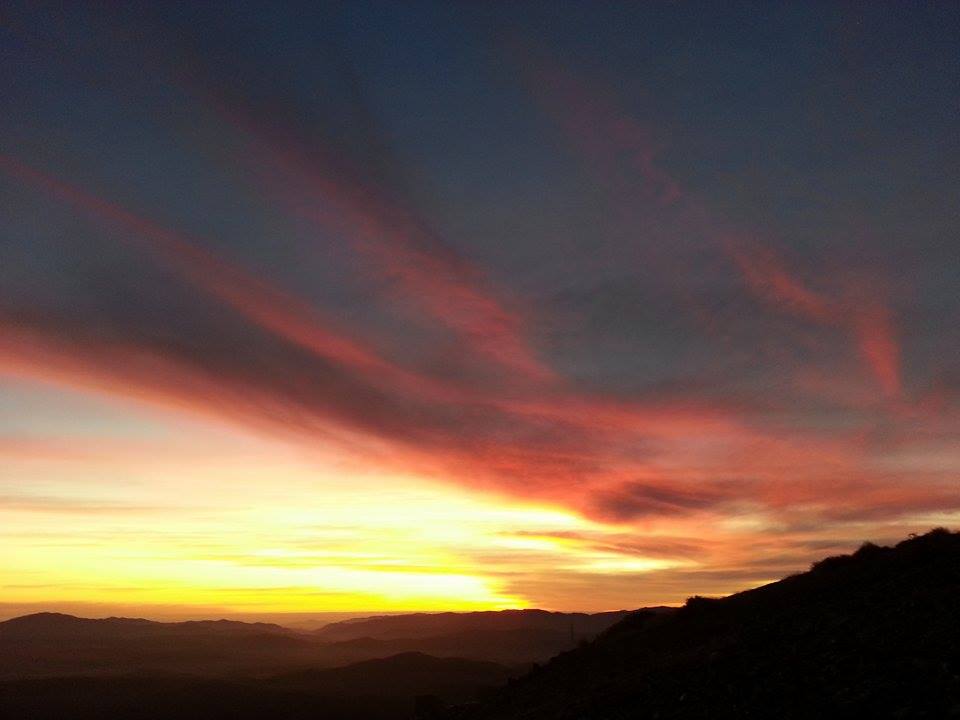 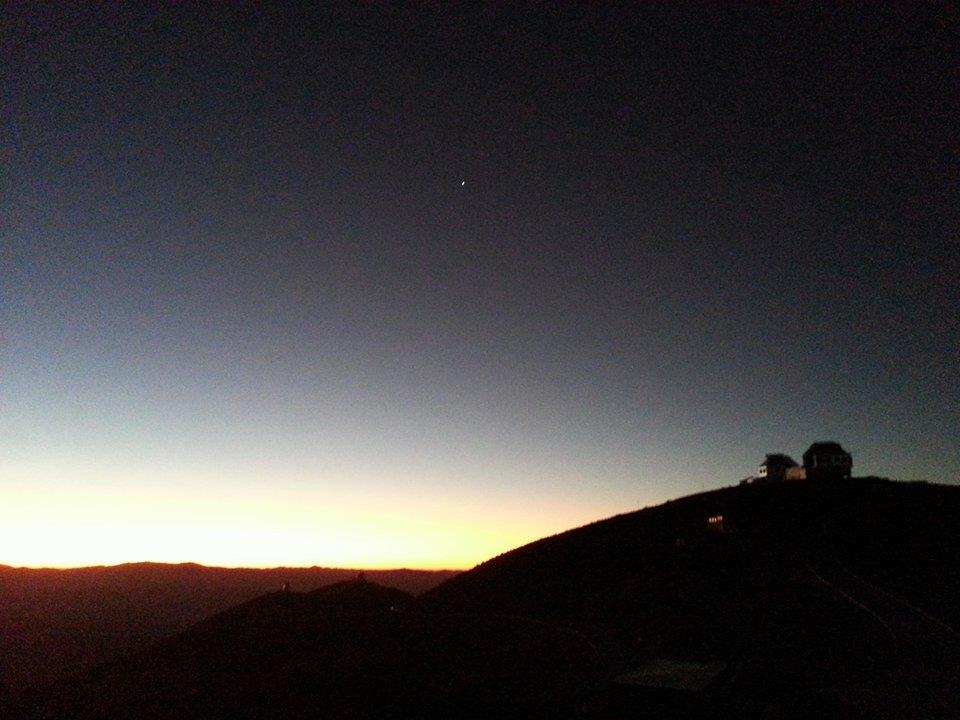 This has been an really exciting opportunity for me to learn lots more about MagAO! And it’s been great fun to overlap and interact with the other observers on Clay and at Baade: Alycia, Amanda, Atom, Jordan, Dave, Nestor, et al. And of course, a great experience to learn some new skills from the resident AOistas. Thanks again for having me, and for providing excellent support during my science night too. 🙂

Time for music! It’s probably safe to say that MagAO+VisAO+Clio2 is one of the “pride and joy”s of Magellan/Arizona, and so I leave the last science night with an excellent blues piece along these lines. But first, you MUST listen to the wonderful cover, performed on nothing less than a child’s Cars™-brand guitar from Walmart:

And the original by Stevie Ray Vaughan:

Alas, no Daughtry or Weird Al covers were available in this case. But never fear! There’s always some of that Weird Al brand of magic to be found: