With much regret, I begin my first blog post of my last run as a Magellan observer.  I’m taking a brief hiatus from my new role as a postdoctoral researcher at Stanford (working on the very exciting Gemini Planet Imager) to rejoin the MagAO team this week.

My goal for these three days is to complete second epoch observations for the Giant Accreting Protoplanet Survey (GAPplanetS). Here’s a diagram showing the basic idea, but with an accreting star rather than a protoplanet. The top image is in a filter that’s centered on an emission line of hydrogen called “hydrogen alpha”. Accreting objects glow at this wavelength. The bottom image is a so-called “continuum” image, at a wavelength where nothing special is happening so we just see normal stellar emission. Notice that the relative brightness of the two stars is reversed in the top and bottom images. That’s because the secondary star in this system (top) is accreting, so it’s brighter at H-alpha than the primary (bottom) is. We’re trying to use the same trick (plus many more complicated processing techniques since planets are much fainter than stars) to detect forming protoplanets.

In keeping with the spirit of this 2015A run, we had a couple of minor glitches this evening (dead wind monitor, software slowdown), but nothing Katie and Jared couldn’t handle. Weather-wise, we were a bit better off than yesterday. No clouds, but we did have a bout of high winds. Jared  wisely advised us to close for a while during a particularly bad spike of high winds and poor seeing, but I wore him down with my minute by minute countdown of improving conditions.

On the verge of reopening, Katie introduced me to the term “sucker-trough”. Much like a sucker hole, a sucker trough is a respite from bad observing conditions (seeing in this case) that is just long enough to convince you to do all the work of reopening before the bad conditions return.

Luckily, conditions got incrementally better after that so we never quite had to close again.

On a personal note, this has been my first observing run ever where I got off a plane and jumped right into observing (rather than arriving a day or two ahead of time and getting acclimated). I think this is the new normal now that I’m a parent, but luckily sleep deprivation is one thing I’ve gotten better at since having a child!

I’ve only been here for a day and already need to clarify some  inaccuracies from yesterday’s blog.

1) My website does not contain ads for anything except an awesome Quantitative Literacy assessment instrument for general education science courses.

2) I am not afraid of scorpions. See the following text exchange with my husband for an explanation. 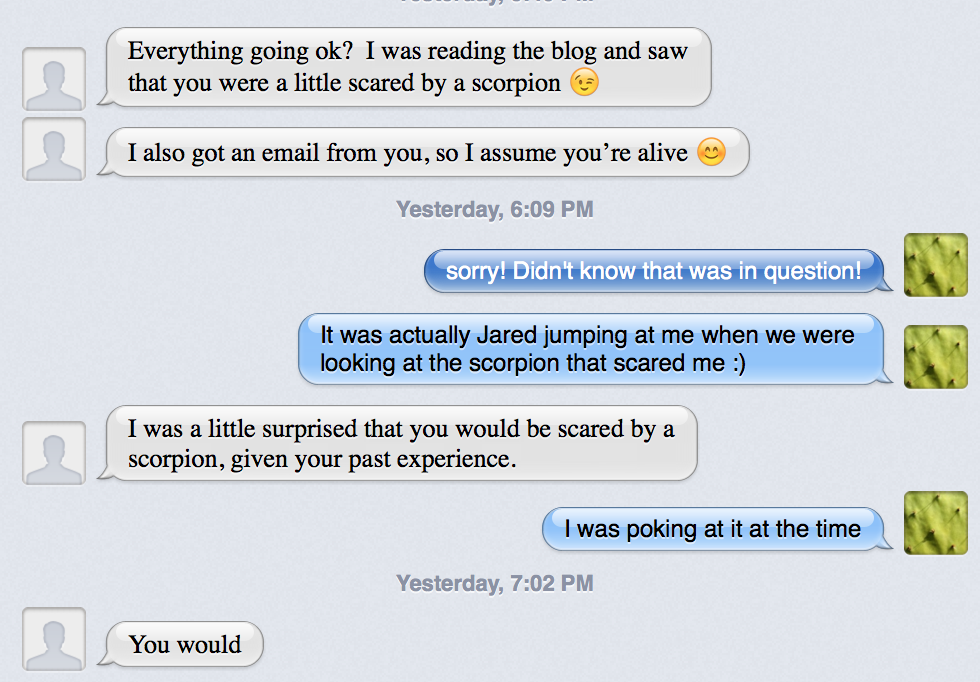 The song(s) of the day today are by the lovely and talented Anais Mitchell, my former college suitemate, now a successful folk singer. I actually set out to be the first to post a song without a cover, but even Anais’ early songs, the ones she was singing when we were in college, have been covered. Of course they have, because she’s amazingly talented. Enjoy!

Here are three of Anais’ songs:

And, per official 2015A blog rules, three covers of those songs: