I’m very happy about how we switch between our target of interest and its point spread function (PSF) star, so I’m guest blogging about it. We want the same AO correction on both objects, even if they are slightly different magnitudes (usually we choose a slightly brighter PSF). We also want to be very efficient, of course, and change between them quickly.

Keeping these in mind, I look for a PSF that is 1) nearby on the sky, i.e. within a few degrees of the target, and 2) has a similar temperature to the target (so the wavefront sensing in visible and the IR camera still see similar brightnesses).

When we are ready to go to the PSF, it takes everyone working together to make the change efficient. We make sure the two science cameras are done integrating, and then we tell the AO operator (AOO) to “pause” the AO. This opens the loop, but saves the gains (the strength at which the AO modes are driven). Once the AOO confirms that the AO is paused, the Telescope Operator (TO) moves the Magellan guider from its park position (GPARK) to its center position (GCENTER). Once the guider is in, it occults the wavefront sensor, but we can see in the guider field of view exactly where the star was placed when it was centered on the pyramid. Since the AO wavefront sensor is off axis, the location of the star as seen by the centered guider changes with time and position on the sky, but since our PSF and target are close together, the position of the PSF should be very very close to where the target was. So, the TO marks the position of the target in the guider.

Now, the TO slews to the PSF star and brings it to the marked position on the guider. He then moves the guider out of the way, back to its park position, and voila, the PSF appears on the pyramid. Then the AOO can unpause the AO system, and we’re locked on the PSF with the same gains (level of correction) as we had on the target.

In other words, “Everything is cool when we’re part of a team.”

We’re not just singing “Everything is Awesome” on our PSF switching. We also sing it when we’re able to stay closed loop on a star when it passes only 46.5 min from zenith. Magellan is the only Alt-Az telescope I know that tracks so well at zenith and without vibration. And Laird says MagAO is the only system that can keep the loop closed when the rotation is changing so fast. How awesome is that?

By virtue of doing my afternoon conference call from the Vizzytor Support Building, I got a good look at our sleepy friend Vizzy. An energetic relative of his (hers?) was hopping around the rocks just west of Clay as I left the dome yesterday morning. 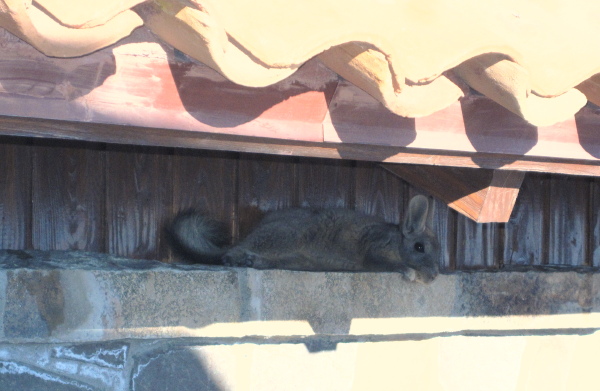 I wish I could sleep as late into the afternoon as Vizzy.

Tonight we said <cough> goodbye </cough> to Alfio, who is headed back to Italy tomorrow (despite the efforts of the Lan Chile domestic pilots strike). Kate chose this farewell song in his honor. We trying not to let the AO system know he’s gone, since it’ll be 24 hr before we can call him with any desperate pleas for help.

And finally, for some science. Here is a cool quick data reduction complements of Kate Follette that shows the re-detection of the accreting (H-alpha bright) point source from last year’s commissioning run (HD 142527B in Close et al. 2014, ApJ ). The new H-alpha and continuum filters are working well (see yesterday’s blog post showing the differential imaging).