Greetings everyone! Long time no blog for me, but I’m happy to be back.

In between running the VisAO camera to give Jared a bit of a break, I’ve been working on quick reductions of the data that we’ve been getting for the past few days. It’s useful to reduce the data at the telescope because these “quick looks” can tell you whether you have what you need or, even better, whether there’s something interesting and unexpected in your data to follow up. We’ve had a bit of both over the past few days as TJ, Jared and I have been running our reduction routines.

Without getting too much into specifics of the targets, I’ll tell you that I had the following problem popping up in my reductions last night 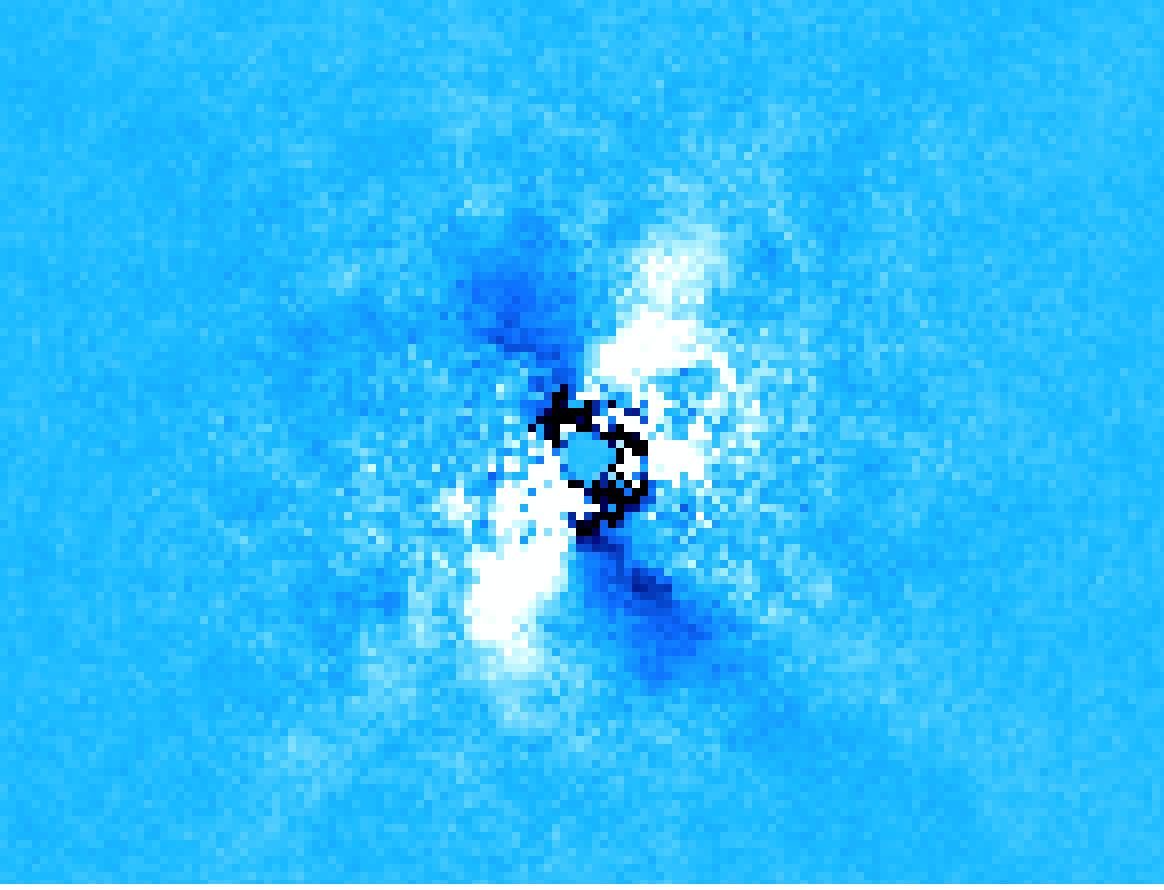 See how you see a bright disk but also a shadow with roughly the same shape? I had to think about it for a bit, but eventually I figured out what my problem was. To explain the solution, I think I should first explain how this type of reduction works.

My pipeline does a kind of data reduction called “Angular Differential Imaging”, which is a neat way to get rid of light from the star in your image and see faint things near the star. Here is an official introduction to the technique, but I’ll explain it very briefly for blog purposes.

For most astronomical observations, you use a rotator to keep the orientation of your object exactly the same as the sky rotates so that the rotator essentially cancels out the rotation of the sky. For ADI imaging, you turn the rotator off and allow your object to rotate with the sky. If you then line up the star in all of your images and median combine them, anything real around the star will have moved around it over the observation, and so it won’t show up in the combination because it won’t be in any given location in more than half of them. Anything fake (well, most things) caused by the optics of the telescope and instrument though, will be in the same place in all the images so it will show up in the median. In other words, you intentionally smear out the real circumstellar structure while keeping the fake structure the same and recover the so-called “Point Spread Function” (PSF) of the star in the median image.

You subtract this PSF then from every individual image to remove the starlight and then rotate them all to compensate for the rotation of the sky so that the orientation of the object is the same in each frame (essentially the same thing that the rotator would have been doing if it were on). This trick usually lets you get rid of starlight very nicely and helps you to pull faint objects like planets out from the data.

It’s trickier though for disks, which is mostly what we’ve been observing for the past few days. If you have a disk that’s symmetric about the star, then allowing the field to rotate doesn’t help you much and the disk shows up in your median-combined PSF. When you subtract the PSF, you subtract most of the disk light too. Bummer.

For this reason, people didn’t use ADI for disk observations for a while, but it turns out that you can make it work in two situations. (1) if your disk has any features (blobs, spiral arms, etc) that aren’t circularly symmetric, then they’ll survive and (b) if your disk is inclined enough (so that it’s not a circle but an oval on the sky) and you allow it to rotate enough so that the disk light appears in fewer than half the images at any given location, then you can still get rid of it for a PSF.

I’d never used this method with our SDI mode before because generally we use the opposite (continuum) channel as a PSF, but we recently pioneered a so-called “ASDI” mode (see Close et al. 2014). The idea there is that you can ADI both SDI images and then subtract them and you essentially get the benefits of two forms of differential imaging.

OK so now to the problem with my new ASDI pipeline. As an object reaches it’s highest point in the sky (transits), it starts to spin faster and faster. We generally get on these objects about an hour before transit when it’s still rotating slowly. Since the rotation starts out slow, then gets fast for a while, then slows down again, the images aren’t equally spread in rotational space. You take a lot of images during the long interval when the object is spinning slowly and not as many while it it spinning quickly. In this case, we left the object right after transit, so there were a bunch of images at approximately the same rotational position, then a few where the object was spinning a lot. If I weight all images equally in the median, disk light ends up in some places in more than half of the images, and I get disk in my PSF and therefore a shadow when I subtract it.  So I edited the code to combine images according to rotation angle instead of by sheer number of images. It still has a bug though and I’m sleepy, so you’ll have to see the fix in another blog post. 🙂

Here are some pretty pictures to tide you over. 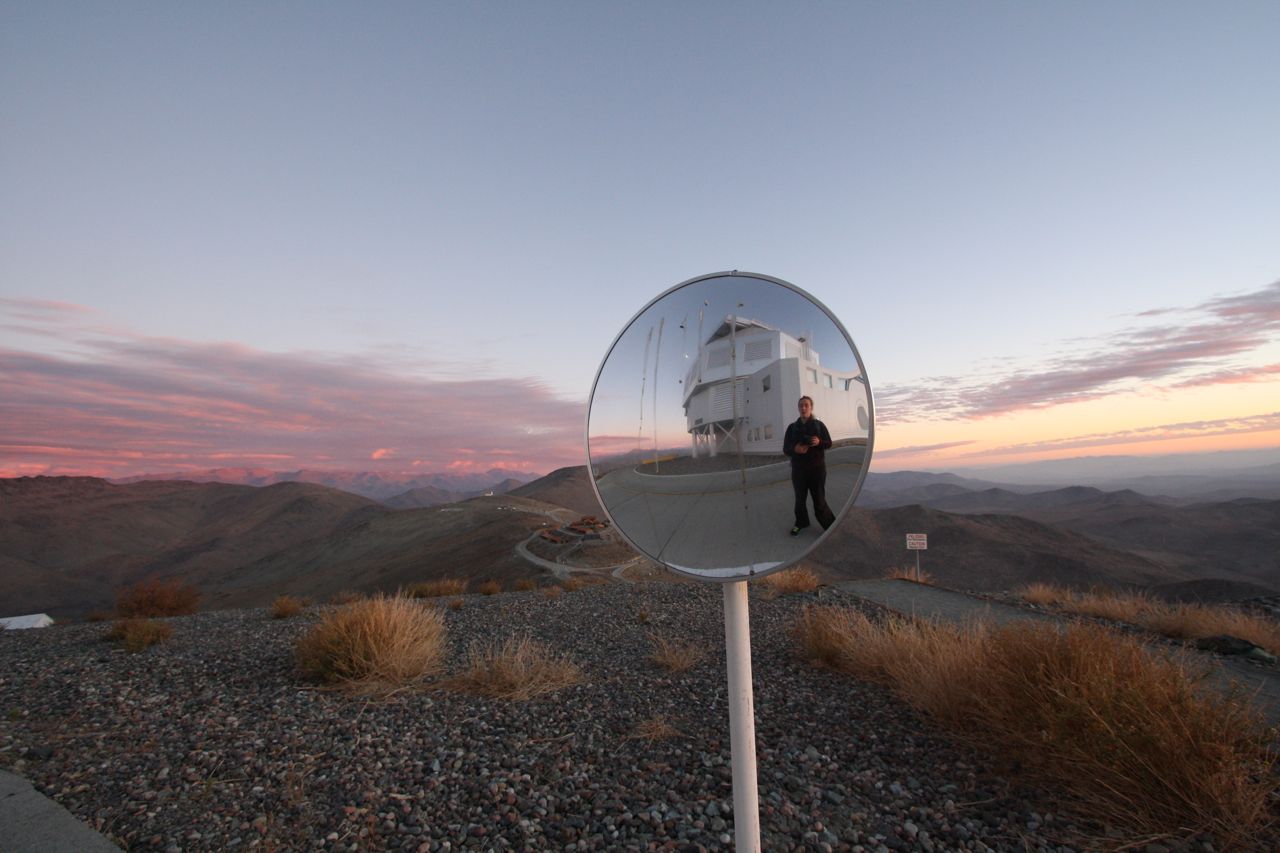 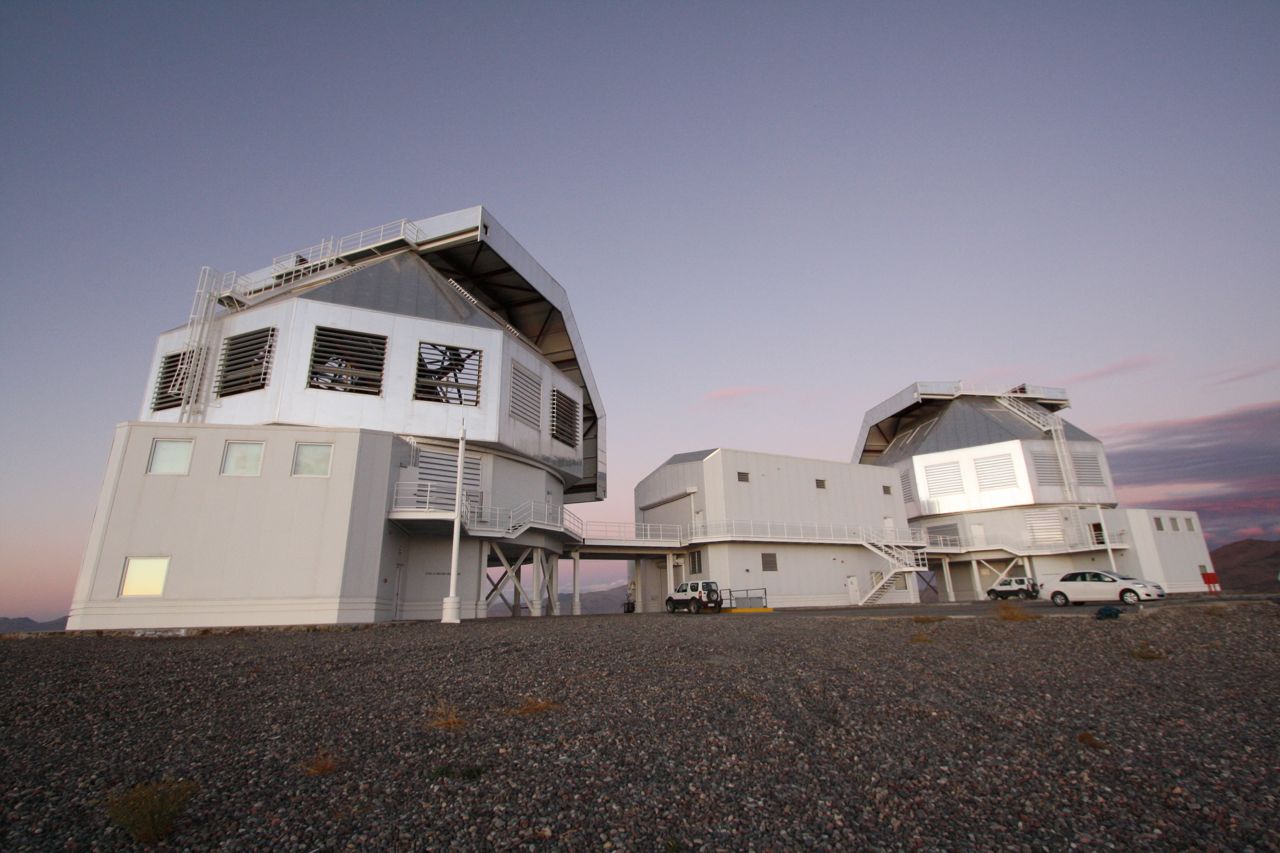 I feel like the pictures we post here can’t really capture how beautiful the 360 degree view of the Andes is, so I’ve been playing with the panorama function on my iphone. It only gives you a 180 degree view, but I think it’s an improvement. Here are a few of my favorites.

We are officially halfway through our run. Although we are super happy to be here and getting great data, we all miss our families and want to thank them for putting up with our long trips here every semester (and for being our most devoted blog followers). Also, thank goodness for Skype/FaceTime. I don’t know how astronomers managed these long runs before video chat! 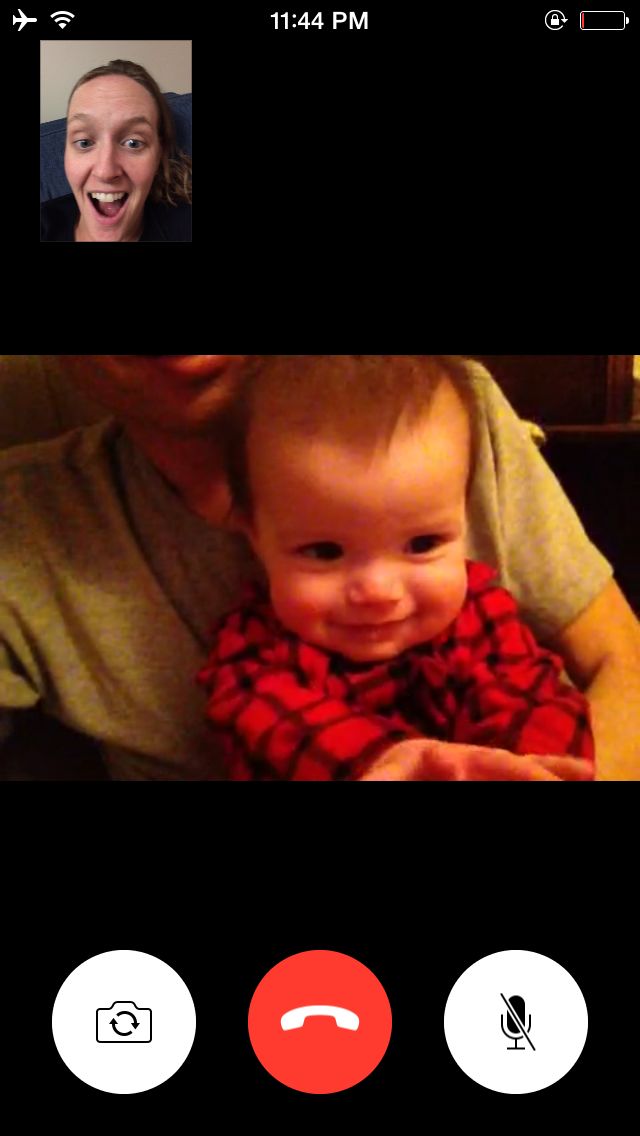 As I worked on improving my ADI reduction scripts tonight, I kept an ear out for some of Laird and TJ’s usual gems. Here’s a smattering of my favorite quotes from tonight. Everyone gets a little punchy and weird this far into a run, so there are quite a few.

“Technically plants are animals too” -TJ
“I am a marshmallow, your advisor.” -Laird
“I’m just very lucky I have good students” – Laird    (yay!)
“I’m the new Alfio” – Laird
“There’s a Clio manual?” – TJ, the Clio operator
“Signal to noise is always lower at home than you think it was at the telescope” – Alycia
“Aww. TJ’s so cute” – Laird, in response to TJ’s optimism about a target
“don’t use your finger to point to the screen” -Laird
“oh sorry you don’t want me touching your screen” -TJ
“no it’s just that your finger is fat” -Laird
“guys, what was your first CD?” – TJ
“my first TAPE was the soundtrack to Miami Vice” -Jared
“Laird probably owned LPs” – Alycia

We also spent a while tonight debating whether the They Might be Giants version of “The Sun is a Mass of Incandescent Gas” was better than the original, but I’m writing the blog post so my opinion is what counts for today.